What is it like to be laughed at by a group of active military soldiers?

Scared (Vulnerable) and Facing My Fears

In my early professional life, I could have been described as the poster girl for play therapy. (Let's be real, if you know me, you know that I'm still a geek over being a play therapist..."It's my jam.")

Anyway, I was working with other professionals that were not familiar with the concept of Play Therapy. I heard a lot of snickering and giggles from my co-workers with comments about "toys" and "just playing with them."

Have you ever believed in something that others did not understand?

Defending your "jam" can often lead to scary feelings, especially when worrying about what others might say.

I think that mockery penetrates deeper than the fright, it just hurts. I have had multiple experiences when people were not able to understand me, perhaps because I am too intense and passionate. I become excited, loud, and sometimes I scramble for words. I probably look silly, too. These special traits sometimes intimidate people or turn them away. In all honesty, sometimes, it makes me feel like an outcast.

In my adolescence, the worst thing that happened to me was being laughed at by my peers. That fateful moment when I showed up to a homecoming dance with the same strapless blue dress that three other girls were wearing. At the time, I was a freshman and I just wanted to blend in. The nervousness was building for weeks with the preparations; finding the right shoes and practicing how to wear my hair. So when my friends laughed at me, it stung, and it was humiliating.

Fast-forward and imagine being a young professional and experiencing yet more laughter...I will admit that it still stung just as badly. The doubts reverted me back to that young adolescent for a brief moment, but this time it fueled me to prove that my "jam" had worth.

What is Play Therapy?

Play Therapy is an effective, research and evidence-based therapeutic approach that uses creative interventions, sandtray, role-playing and metaphors to resolve conflicts and explore emotions without having the pressure of using the right words. Insert cheer hands!

Later on, another counselor challenged me to work with his unit of military soldiers. During that period I did not like working with adults unless they were parents of my clients. (Don't ask, just keep reading).

Just the thought of working with adults made my whole body shake while holding my breath until the situation was over. I told myself and others that I wasn't trained enough to handle their "big people problems."

So, being asked to work with big strong humans (soldiers) who have faced some of the most intense situations was basically my nightmare. Naturally, I accepted the challenge...because a challenge is a challenge and unfortunately I haven't been able to back down from one yet! No doubt, my coworkers were thinking, "Sucker!"

Holding my breath, I pushed my sandtray with boxes of miniatures stacked on top and got ready for "battle," or so I thought. What do you know -- I  was greeted with confused looks....and then...I heard loud belly laughs. Like the kind of laughter that echoes through an empty room. At that moment I realized that they were laughing at me! I was filled with doubt and fear. Alas, my competitive spirit took over. Challenge accepted.

It was game on, so I put my big girl panties on and began to work my magic. My magic does not stem from a wand even though that would seem fun. It comes from somewhere else where truth is found.

Within 15 minutes, laughter turned into silence. These soldiers listened to their peer who was processing his trauma in my sandtray with my miniatures. The silence of the room was thick. I could not wait to ask them to choose a miniature for themselves. These big, larger than life humans became scavengers, looking for the right miniature.

This is when I knew "the process" had taken over and I was merely an observer.

Healing comes in many forms. With sandtray, these stoic humans were allowed to process their worst moments through miniatures -- a distancing process to allow the brain to make sense of it... then, release it.

In the end, the soldiers continued to ask for the "lady with the toys" and this poster girl happily obliged. I felt like Wonder Woman. Their laughter turned into a fond respect.

What lesson can we learn from feeling fearful?

It's natural to be afraid of or perplexed by things we aren't familiar with and it's okay to be scared because being scared means that we are about to do something really, really brave.

Be Brave...laughing all the way!

Just What I Always Wanted 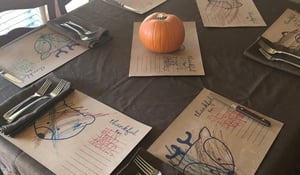 Okay, Karen! Is Your Anxiety Related to a Personality Type?